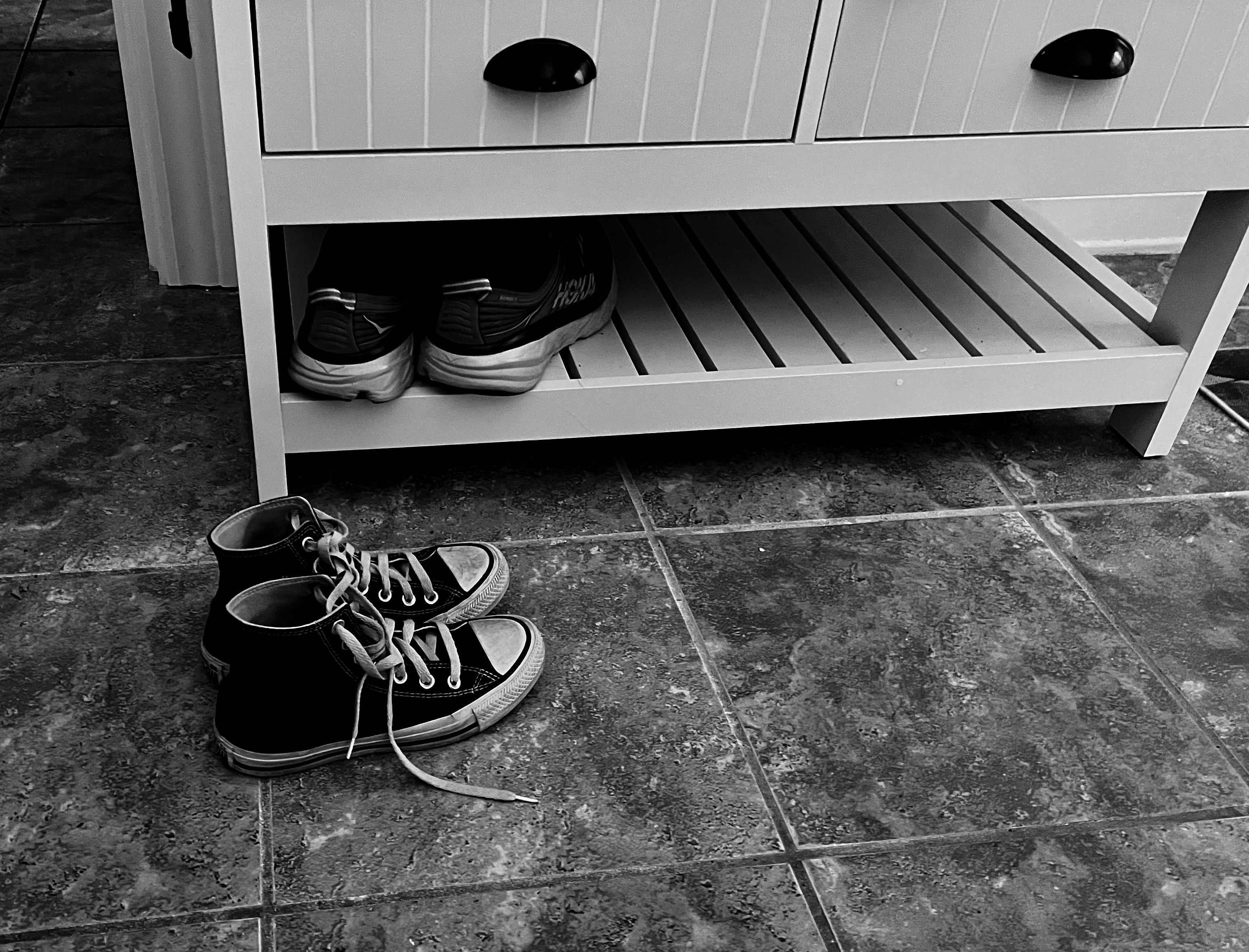 ‍The Shoe and Chuck:
Converse started making an early basketball shoe in 1917 and redesigned it in 1922, when Chuck Taylor asked the company to create a better shoe with more support and flexibility. After Converse added Taylor's signature to the ankle patch, they became known as Chuck Taylor All Stars, the first celebrity-endorsed athletic shoe.

Me and Chuck:
When I was ready to go into seventh grade, my mother, by all accounts a very proper woman, raised in the United Methodist Church and a member in good standing, a Registered Nurse, and a registered Republican, respected by her peers and in the community, bought me my first pair of “Chucks”.

“Chucks” were what we called the Converse Tennis Shoe named Chuck Taylor All Stars made by the Converse company starting in 1922.

We went downtown to the JC Penney store and bought the black and white high-top style because I had weak ankles. The lace up was supposed to support the ankles and make me better. OK, that was fine, I sucked at ice skating and rollerskating because of my ankles, but now despite that I could still be cool.

But more than that, and to my complete surprise, she granted me permission to wear them to school every day. Not to take them to school and place them in my locker to use in gym class. But to put on my feet, in the morning as I was leaving the house, and wear all the live-long day as, “school shoes.”

I remember it very clearly because when I was in grade school, just 3 months before, Mom insisted that I wear proper pants, with razor-sharp creases and ironed to within an inch of their cotton-blend life. Of course, there was a matching shirt, with collar ironed, and “school shoes” with a matching belt.

School shoes were leather, with laces – never loafers, in deep brown or Oxblood, could be cap toe or wing tip, and maybe soft sided Chuka boots if your family were Democrats.

But, it must be proper shoes that showed respect for yourself, your family, and the institution.

I’m not sure what happened between early May when sixth grade let out and when she started shopping for my fall seventh grade attire in early August, but suddenly the game completely changed.

It could have been my sisters, an Ohio State Grad, and Kent State almost Grad respectively, that had “a sit down” with Mom and brought her up to speed. Or maybe she was just tired of trying to get me to go to school the way she and Dad did in 1937 – in their “normal” hip attire – and she just finally let it be what it was supposed to be.

We couldn’t afford Levi’s, so we went with Wranglers. My everyday uniform became Wranglers, a t-shirt, and a pair of Chucks. The round logo on the side with red letters, the blue star and Chuck’s actual signature. Classic from day one. My Chuck’s were one size too big for a few years because nobody ever had size seven, and I didn’t grow much after that. But, I didn’t care if my toes were miles from the end of the shoes, they were Chucks, they were cool, and therefore, so was I.

Back then there was no “shoe sole technology” or optimum structure to support your arches and enhance your athletic performance. This was a flat slab of rubber, connected to a canvas high-top shoe, laced to your foot, and held together by a big double knot and coolness.

And that was the power. The benefit, the energy. It was the blue star and ChuckTaylor’s signature. Pure power.

The round white toe with the black edge outline sticking out below bell bottom pants made every wearer completely legit.

As the years passed Chucks became the standard foot ware of Punk Rockers and Hipsters, for anyone Woke enough to strap on a pair and allow the pure and unspoiled life force to inform them on what is the anarchist vibe. A vibe that resonates through their weirdly fuzzy waffle soles that stick them to our ever-changing earth.

To me, Chuck Taylor’s are the are worn by poets and truth tellers, life observers and writers, those who possess the courage to stand at the mic and declare their vision and passion with tears and hoarse voiced grit, not caring what the current “accepted” position or attitude is.

That’s why I was so proud when my youngest, my baby girl, who possesses wit and opinion and vocabulary beyond her years, said she wanted “black and white Chucks, the high-top kind”.

In that moment I knew that she would be fine, that I hadn’t messed her up by getting in the way of her finding her opinion. Now, anyone that looks at her shoes knows what flag she’s flying before she says a single amazing insightful word.

Her Chucks and Me
‍I came in through the garage and just inside the door I looked down, and in front of the bench they sit.  Laces are all in a jumble, but heels arranged evenly together like you do when you pick up a pair of shoes in between index and middle finger. Together and even, describes my kid, with some order, but not too much.

Her Chucks announce that my not-so-little girl is home from college, to tell me stories of the road, and about all the new things she has seen and heard. What’s changed for her while she’s been away and what’s different now that she's come home. When she was a kid, she always wanted me to take her to get ice cream, but now just wants to go for a coffee and chat. She isn’t in as big a hurry now either.

I think I see now why my mom went with a pair of Chucks instead of wingtips.